At the closing ceremonies for the Pepsi Provincial Junior Curling Championships on Sunday, the Asham Coaching awards, as voted on by coaches and officials, were handed out, with Kevin Smith, coach of the winning junior men’s team from Montague skipped by his son Tyler, receiving the award for Junior men’s rinks, and Shelley MacFadyen, coach of the Clara Jack team from Cornwall receiving the junior women’s teams award.

Also handed out were the sportsmanship awards, voted on by the curlers in the event. Rachel MacLean, skip of the junior women’s finalist rink from Cornwall, and Jack MacFadyen, third on the Brayden Snow rink from Charlottetown and the Silver Fox were the recipients.

As well, in honour of Tyler Smith’s final junior event in PEI, three generations of the Smith family, father Kevin, grandfather Grant, and Tyler took time for a photo with the F.R. Seaman Memorial Trophy. Kevin informed the crowd that was Tyler’s 57th game in a U21 Provincial Championship event. He has now won five PEI Junior titles, his first at age 14, as well as a New Brunswick Junior title.

There was also a presentation on the junior women’s side, with curling parent and team sponsor David O’Connor making a presentation to Pat Quilty, coach of the winning Lauren Ferguson Junior Women’s team, thanking him for 10 years of coaching of the team, which had a number of players over the years, with the last remaining original member being his daughter Rachel, who is now in her last year of Junior Curling.

The New Brunswick Curling Association  and the City of Fredericton NB present the annual  East Coast SLAM Event on arena ice at the Willie O’Ree Place and at the Capital Winter Club in Fredericton N.B., April 10-12, 2020. This is … END_OF_DOCUMENT_TOKEN_TO_BE_REPLACED 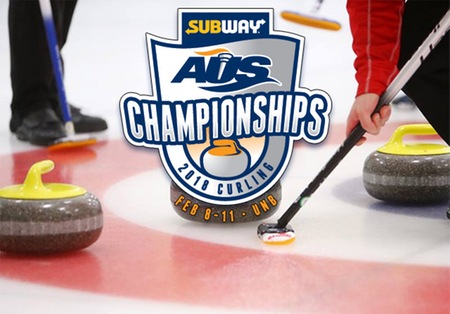 Adult Learn to Curl – Crapaud Community School Starts Thursday, January 9 at 7 pm and runs for 10 weeks. Registration fee will be confirmed later. Open to anyone 15 years and older. The game will be taught … END_OF_DOCUMENT_TOKEN_TO_BE_REPLACED