The Suzanne Birt rink from the Charlottetown Curling Complex will have two chances on Monday to win the PEI Scotties Tournament of Hearts Provincial Women’s Championship title in the two game championship series, at 1 and 6 pm. at the Silver Fox Curling and Yacht Club in Summerside. The Birt rink won two sections – the B and the C, of the modified triple knockout draw, and will take the title if they win either game, while  their opponents in both games, the Kathy O’Rourke rink, also from Charlottetown, who won the A section, would have to win both games.

Birt stole a deuce on a measure in the 10th end of the C final this afternoon against the defending champion Kim Dolan rink, to come from behind and win their game by a 7-6 score, eliminating Dolan from the competition. Dolan took a 4-1 lead in the 3rd end, when she made a double hit for 4. Birt narrowed the gap with singles in the next two ends, but Dolan took singles of her own in ends six and 7 for a 6-3 lead. Drawing against four Dolan counters, Birt picked up a single in end seven eight. She stole another single in nine when Dolan was light on a draw to the button attempt, to put Birt one down without hammer coming home, but two great draws in the final end gave her the win, when Dolan’s fina stone left two Birt counters.

Here’s the end by end recap of tonight’s game:

The winning team from tomorrow’s championship round  will advance to the national 2015 Scotties in Moose Jaw SK, Feb. 14-22.

Three teams out of the original four team field still remain in contention at the PEI Scotties, taking place at the Silver Fox Curling and Yacht Club in Summerside. Last year’s champion, Kim Dolan, staved off elimination this morning by scoring three points in the final end of her game against Kathy O’Rourke, winning 9-6 and gaining a berth in the C final of the modified triple knockout at 3 pm against Suzanne Birt.  Birt won the B event, while O’Rourke took the A.

If  the Birt rink wins the C final, they will have an advantage in the two game championship round on Monday at 1 and 6 pm, as they will win the title if they take either game, while their opponent would have to win both. If Dolan wins this afternoon, Birt would still have an advantage, as all three teams would advance to the Monday championship round, with Dolan and O’Rourke squaring off at 1, and the winner facing Birt in the championship game at 6. According to the rules, Birt would get the bye to the final game as she would have competed in all three qualifiers.

The Future Scotties eight end developmental round robin event for female curlers under 21 wrapped up this morning, with Lauren Lenentine beating her Cornwall clubmate Kristie Rogers 12-4, and Lauren Moerike of Charlottetown defeating Sierra Clyke from Crapaud and the Silver Fox by an 8-5 score.

The winning team from the Scotties Tournament of Hearts Provincial Women’s Championship will advance to the national 2015 Scotties in Moose Jaw SK, Feb. 14-22.

Live Curlcast results are available at curlatlantic.com/scoreboard (there are separate results sites for the Scotties, and the Future Scotties, as the events have different numbers of ends).

There is no admission charge to attend the event.

There were two very close games this evening at the PEI Scotties Tournament of Hearts Provincial Women’s Curling Championships at the Silver Fox Curling & Yacht Club in Summerside. In the “A” section final of the four team modified triple knockout round, it was a battle between Summerside natives – Suzanne Birt and Kathy O’Rourke, both from the Charlottetown Curling Complex, with O’Rourke coming from behind, with her fourth stone thrower Robyn Green making a double to count three in the final end for an 11-9 win. O’Rourke had a 5-1 lead in the game after three ends, but Birt took five points in the next two ends to lead 6-5 at the fifth end break. The teams traded singles in six and seven to maintain Birt’s one point lead, but Green hits & sticks for 2 in end eight to give O’Rourke an 8-7 lead. Green’s former skip Birt came back with her own hit and stick for two to lead 9-8 coming home without the hammer, but the three pointer by Green in the final end gave O’Rourke the win.

In the other game, defending champion Kim Dolan from the Charlottetown Curling Complex edged Lisa Jackson from the Cornwall Curling Club 9-8. Jackson was trailing Dolan 9-6 coming home, and had a chance to score three for the tie, but her rock jammed, and she took two, for her second loss in the championship.

Winning the A final gave O’Rourke a spot in the two game championship round on Monday. If she wins all three section finals, she will win the event without a championship game. If a team wins two sections, they will play in both championship games on Monday, and win the championship if they take either, while their opponent would have to win both.

Saturday at 10 am Dolan faces Birt, with the winner playing O’Rourke at 3 pm in the B final, and the loser taking on Jackson. Also on Saturday at 10 and 3 are the first games in the round robin Future Scotties developmental event, for female curlers from the Pepsi Juniors who might one day go on to the Scotties.

Sunday draws are also at 10 and 3, with the two game championship round (if needed) going at 1 and 6 pm.

Game Story for this evening’s games:

Live Curlcast results are available at curlatlantic.com/scoreboard (there are separate results sites for the Scotties, and the Future Scotties, as the events have different numbers of ends).
Updates are also available on Twitter @PEICurling.

There is no admission charge to attend the event.

The winning team from the Scotties Tournament of Hearts Provincial Women’s Championship will advance to the national 2015 Scotties in Moose Jaw SK, Feb. 14-22.

Here is the schedule for both events, incorporating the Future Scotties round robin draw.

Here is the modified triple knockout draw for the Scotties. It will not be updated during the event. Refer to the draw tree on CurlCast for updated version. 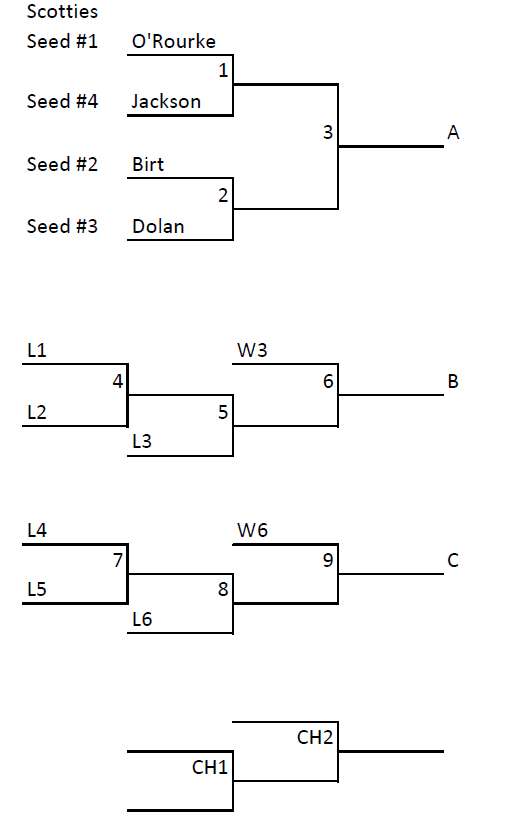